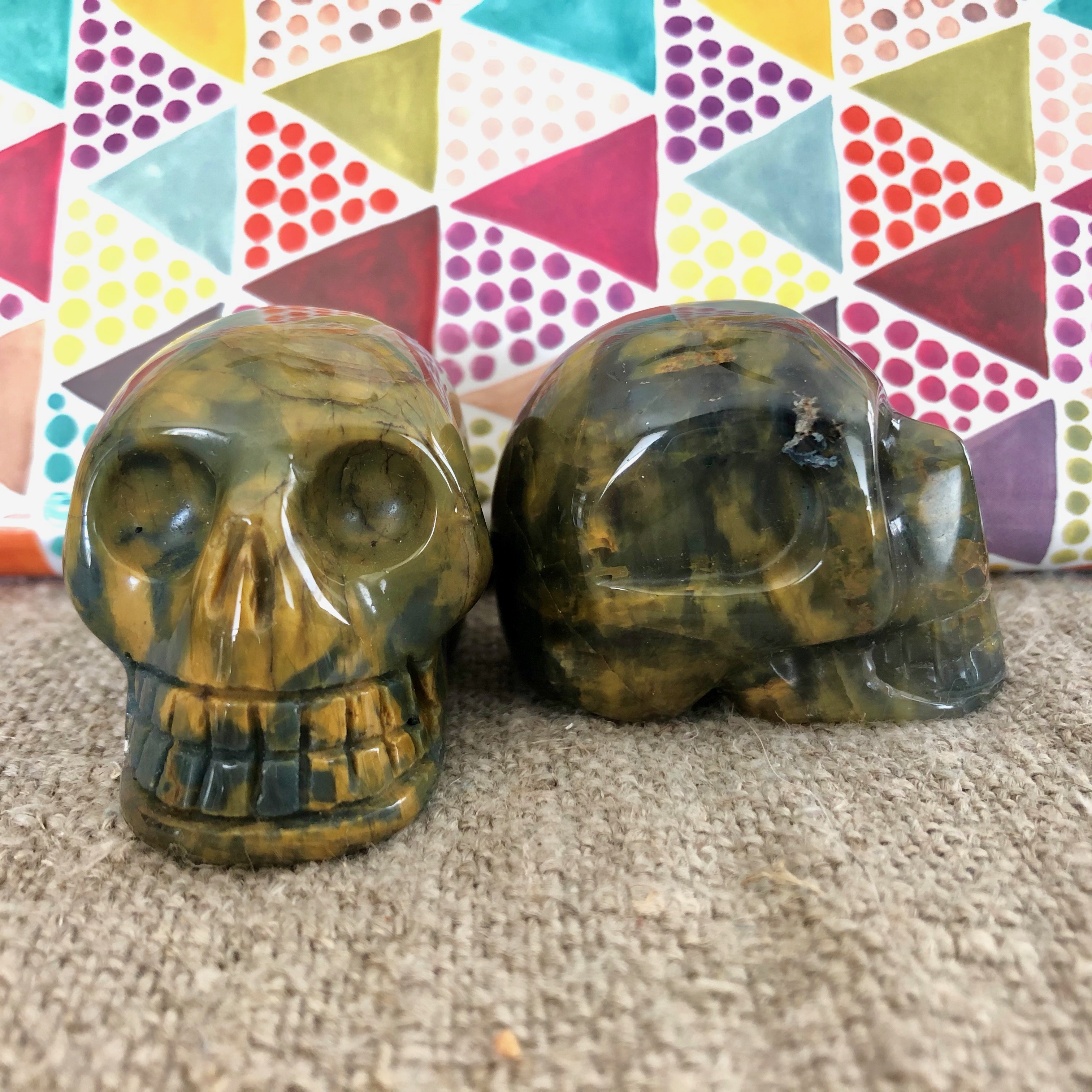 This covellite baby is mine, but we do have another one. Covellite is a deep, indigo stone used for release and transformation; I was called to use it for ancestor work. It’s a copper sulfide and often occurs with other copper minerals–I think this one has little patches of chalcopyrite. I’ve seen covellite palm stones and tumbles before, but never skulls. He’s so sweet! 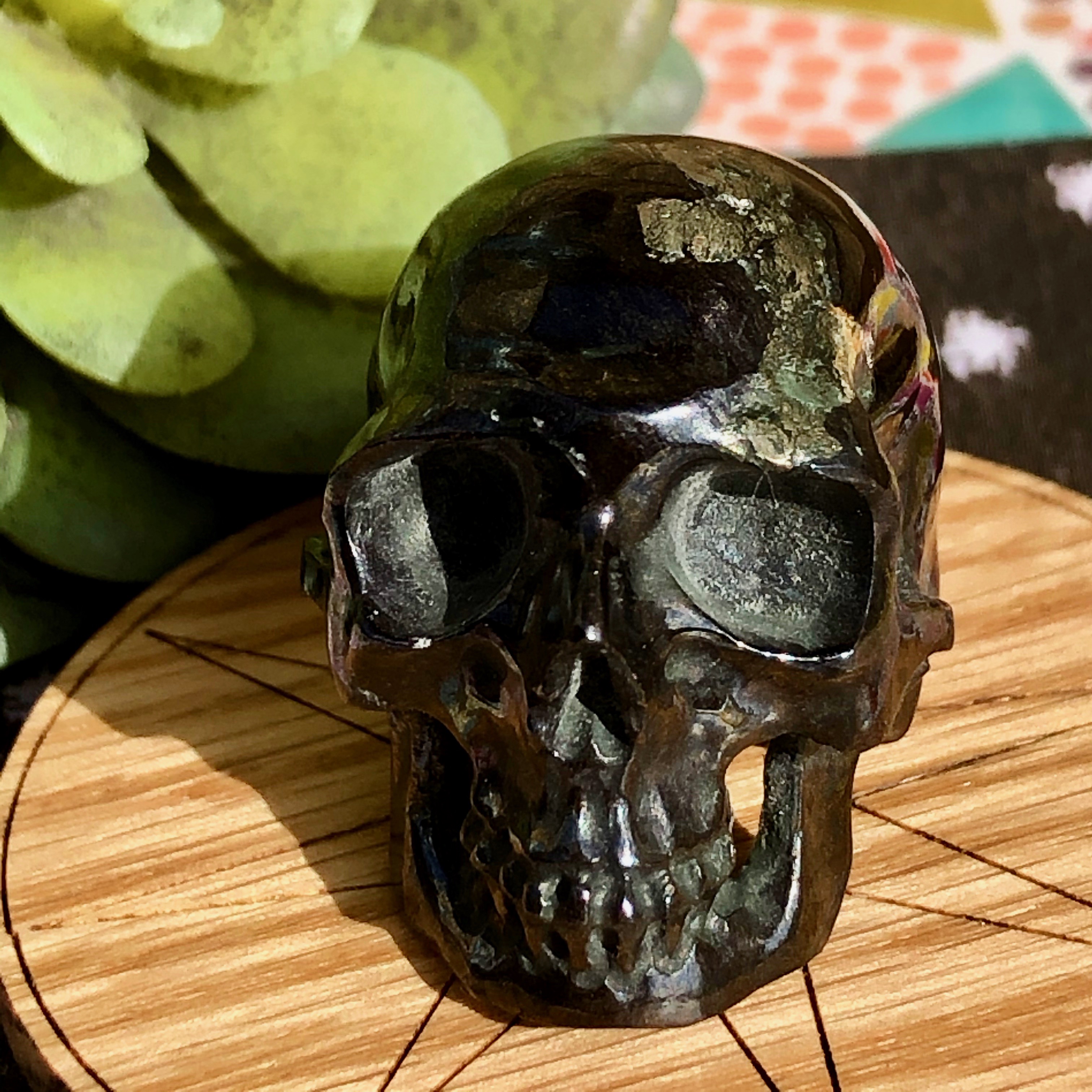 Using our Natal Chart Set with tarot cards is SO MUCH FUN! The trimmed Vision Quest Tarot fits it nicely, though regular-sized decks work placed outside the acrylic ring. You can use this to kinesthetically and visually map out what might be coming up for you given your natal chart, or you can just use the houses disk as a way to lay out a tarot reading in the twelve areas of your life. 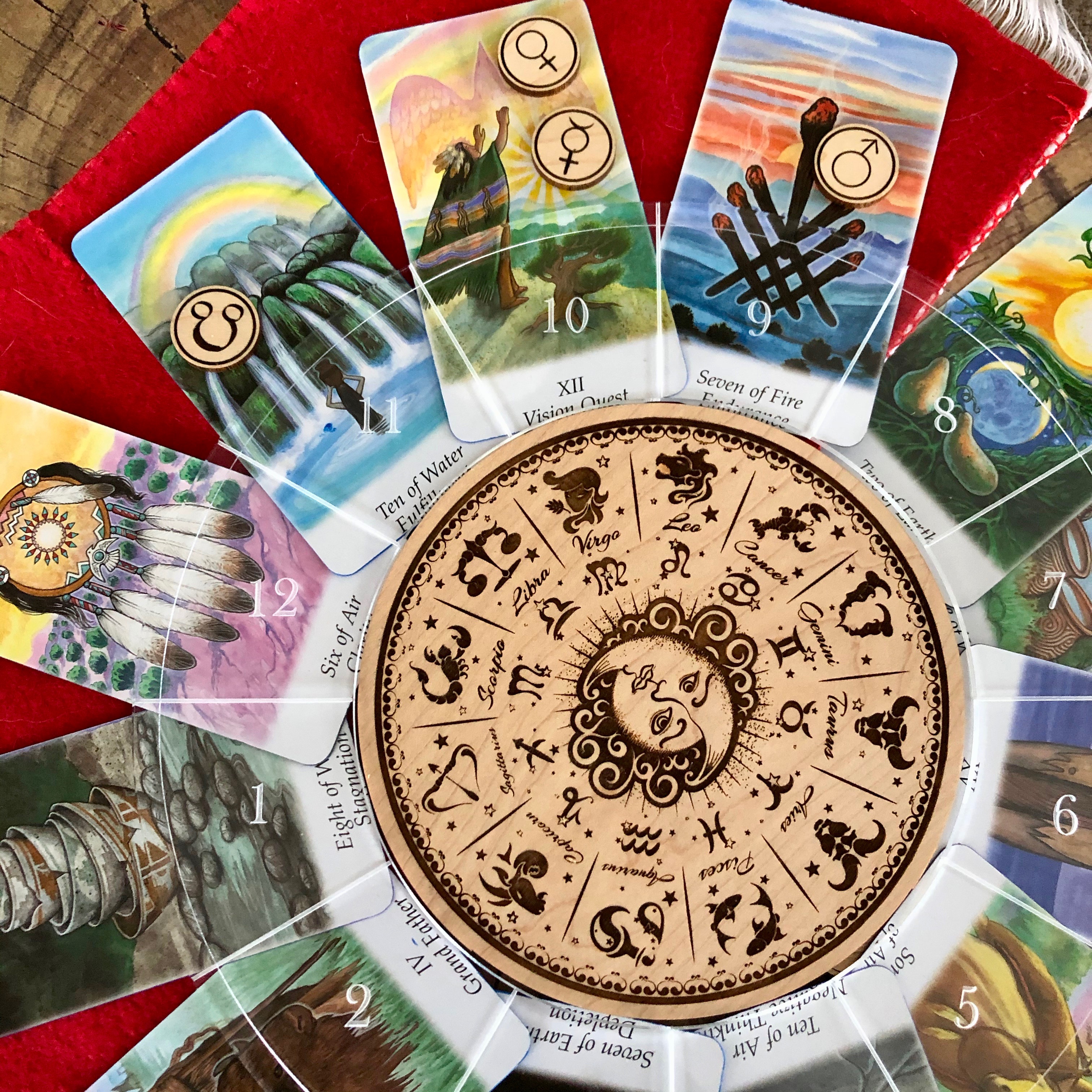 One of the benefits of being an eclectic pagan is the ability to work with different deities or pantheons as they call to you, but this can also be a bit of a challenge? How do you make sure they’re not conflicting with each other, or that in your attempts to be true to what works for you you’re not watering down each one? One of the best ways we and other people have found to do this is to work with one goddess or culture for a particular area of your practice. Maybe you do your ancestor work with one Goddess, your shadow work with a different one, and your daily devotions with another. This gives each one a certain integrity and respect. We also really enjoy pulling out one of our cardholders to work with each one as a small altar. The little altar makes it easier to focus and to pull everything together in a way that feels meaningful but still simple enough to pull off on a daily basis. 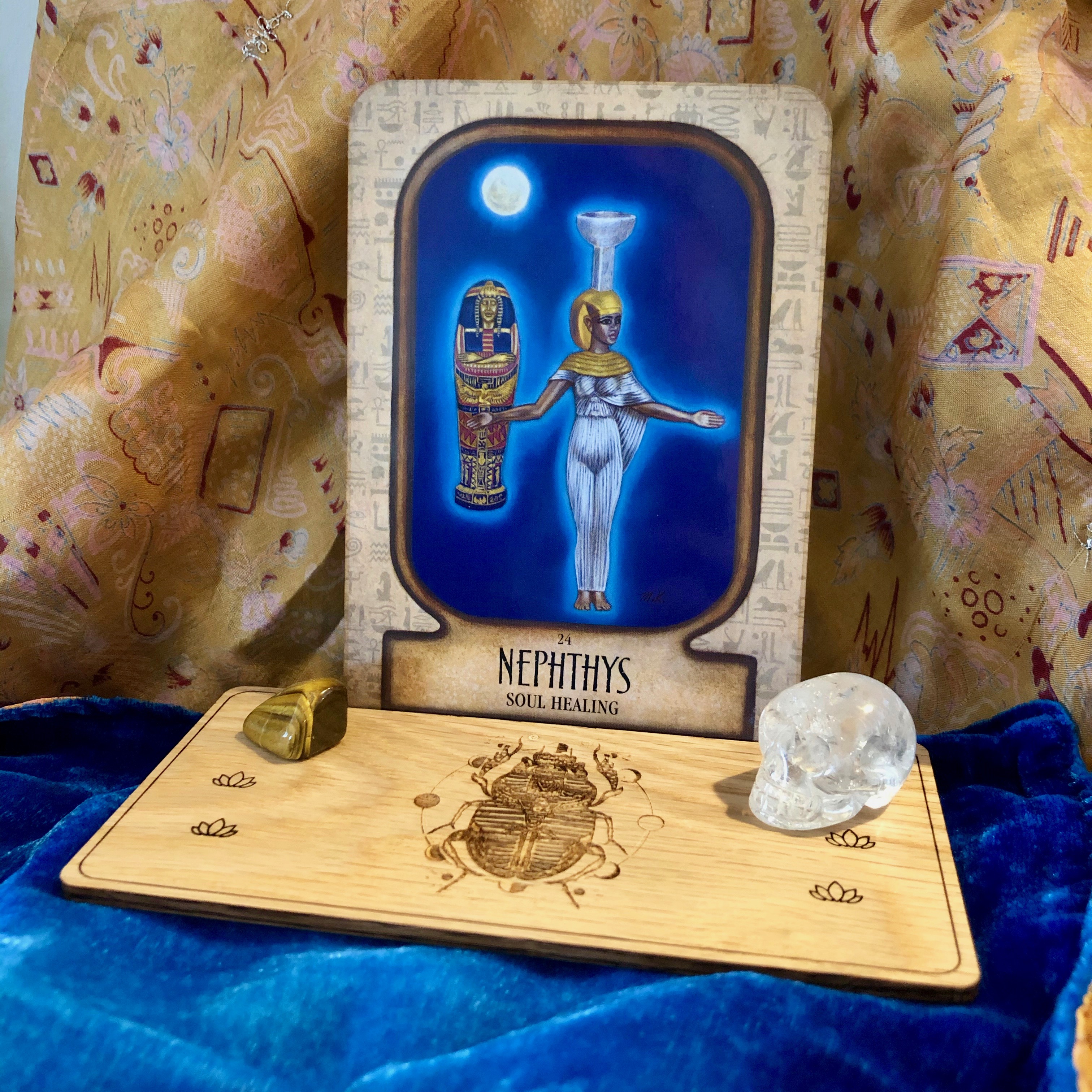 Book Review: Invoking the Ancestors: A Guide to Ancestral Veneration

Right now I’m reading “Invoking the Ancestors: A Guide to Ancestral Veneration” by Mallorie Vaudoise. I’ve read several books about working with ancestors, but I’m finding that this is the most readable and useful one I’ve come across. Vaudoise has a very matter-of-fact, but intimate way of writing that feels like sitting down at the kitchen table with an older sister who knows way more shit than you do.

She describes the different types of ancestors, and how to create altars, rituals, or offerings that you can apply no matter what religion or ideology you follow. Her advice is all hands-on, and she gives enough examples that you’ll find something in the book that you can use. The book itself is a nice size, about 5×8 and 264 pages.

My favorite thing in the book so far has been how she brings up the concept of love languages in working with the ancestors–I never would have thought of that! Just because you’re not incarnate doesn’t mean you don’t appreciate things in different ways. Some of your ancestors might like it if you talk to them and give them lots of attention, while others might prefer that you do an act of service for them, or give them gifts. It’s really a great reminder that relationships with your ancestors are just that — relationships — and it doesn’t hurt to check in and make sure that what you’re doing is working for the other person and not just you!

Magic with Tarot: The Two-Card Spell

Magic is largely a matter of intention, will, and practice. A lot of people, when they just start out with Wicca or as an eclectic practitioner, spend a lot of time practicing spells. Often people are drawn to wicca because they want to create massive change in their lives or they’re finding a new sense of power after being raised in a religion or environment that didn’t suit them.

Once we get a little bit older and buried in the hectic challenges of daily life, or find ourselves much more settled, it becomes harder to find a reason to do spellwork. After all, isn’t it being self-centered to ask for more when we don’t really need anything?

A lot of people do a daily draw, but have you ever tried a daily “spell” with your tarot cards? This is a great way to practice working with intention and envisioning your goals on a daily basis. Pull two cards, and write something (rhyming helps) that inspires you to do something or be your best in a very specific manner.

You can either write in the manner “first this, then that,” or “because of this, then that,” or you can wrap them both into one statement. It’s an interesting challenge to take two presumably random cards and figure out what they mean to you in the context of who you are and what you plan on doing for the day. It’s not often enough that we start a day with a specific intention in mind!

“With brightest heart and passion unfurled,
I shine my light upon the world.”
(Ace of Sceptres and The World)

Living the Wheel of the Year

It’s always a little weird once Samhain is over, but it seems like way too soon to start thinking about Yule, never mind decorating the altar. We tried just switching over the decorations when it “felt right,” but that still felt really arbitrary and didn’t seem to have any basis in reality.

Here at RWT, we feel like our spirituality is connected with reality, with what’s going on visibly in our environment and invisibly in the solar system. But somehow, working with the Sabbats felt disconnected. What are you supposed to do the other 357 days of the year?

This is why we came up with our “Transition kit,” to help us honor the time “in between” in a simple yet meaningful way. We’ve got our board, with a background we designed, in a larger slot that fits greeting cards so people can put in photos and seasonal cards. We’ve also got eight stones, one per sabbat, and at any one time we put two on the little altar — the one on the left is the sabbat that’s passed, and the one on the right is the one to come. So now, we’ve got an obsidian stone for Samhain and a dumortierite for Yule. I like the wheel of the year picture, but we generally use Kim Krans’s zodiac cards.

Do *you* have any tips for celebrating that time “in-between?”

Book Review: The Art of Witch

There’s so many “new witch” books flooding the market these days, it’s hard to tell the difference between many of the — but “The Art of Witch” by Fiona Horne stands out from the crowd. It isn’t just because of the black, flocked cover and the red ribbon bookmark, though I very much appreciate a book that hits it out of the park in the tactile and design department. Where it excels is in its simplicity, authenticity, and wisdom. It aims to be a witchy riff on “The Art of War,” and it succeeds.

This isn’t a book about which trendy crystals to buy or how to hex your ex. It’s about how to walk in this world as a witch and what that means. Horne writes “The Art of Witch is about connecting with deeper roots – and walking the path of service and healing. After all, Witches’ origins are as healers; our Pagan roots position us as individuals walking a path that bridges the worlds of death and life – close to the earth, close to the sea, close to the sky.”

I wasn’t sure whether I’d find the book too preachy or agenda-driven, given that she writes about service and healing and the environment, but it really comes from a place of integrity and wisdom that comes from having lived a good long while and seen just about everything. We highly recommend it!

Tools of the Trade: The Athame

An athame (pronounced A-thayme) is a ceremonial knife, usually associated with the element of fire. It’s used to direct energy; a lot of people use it to cast a circle for ritual. They tend to be black and double-edged, but as with everything in your choice of tools your own preference is an important factor. Here, we’re showing you an athame made out of dogwood for Hekate, and another smaller one which just feels really good in the hand. We’d love to see yours!